So this is what it looks like (its a small resolution screenshot as my Netbook has a small screen, imagine how nice it would look with a large desktop monitor :)):- 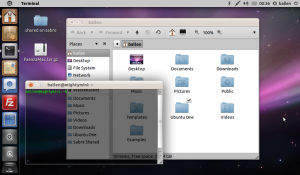 Firstly you should download FaenzaMac.tar.gz this files contains all the icons and some other bits and bobs…

Now drag and drop the FaenzaMac.tar.gz file into the Appearance Preferences window, it will then install the theme for you…

Now choose Radiance as the theme you want to use (the screen should now update) then click on the Customise button.

Under the Controls tab in the Customise Theme window, scroll up and select Aurora.

Now you can close the windows! – Where all done!

I personally like this theme better than Macbuntu as it does not alter core system files and is much more light weight and not as buddy, this is a simple change but personally I think makes a nice improvement to how my Netbook looks 🙂

Added:
I have now also added some extra stuff to my theme but adding the following two ‘Window Borders‘ which allow you to have the nicely styled MacOSX window borders (install in the same way, drag the two tar.gz files below into the Appearance Window and then select the new Mac OSX Window theme from the ‘Window Border’ tab).

Here is also a Pointer theme too that looks simular to make, install in the same way as above 🙂